A profit warning is an official statement to the stock exchange from a publicly listed company that says that it will report full-year profits materially below management or market expectations.

Investors typically use a company’s earnings outlook and profit forecasts to guide their investment decisions, so the implications of a profit warning for both companies and investors can be significant.

City analysts monitor companies listed on the London Stock Exchange and receive briefings from company executives on their performance, projecting earnings, and profit figures based on this information.

This is because it’s an offence to create a false impression of a company’s performance and it’s imperative to correct misleading information or forecasts that have been issued to investors and the general public.

If company executives know their profits won’t be as high as those forecast by the analysts, this information must be publicly disclosed to shareholders and the stock market by way of a profit warning statement through the RNS.

A profit warning from a major group often triggers a drama. Shares are a claim on future profits and City analysts, brokers and big investors can desert a company in droves if they are spooked.

For example, MPAC group warned on profits in July 2022. It released and RNS statement on trading and included the line: “Consequently, the Group now expects that profit in respect of FY22 will be significantly below current market expectations.”

The share price gapped down from its previous close of 380p, opened at 290p and started selling off at the open. It fell throughout the day and the following day too.

When is a profit warning issued?

They are often announced towards the end of a financial period when it has become clear that the company won’t be able to meet the existing guidance. But profit warnings can happen at any time. Whenever trading has deteriorated management must update the market.

Analysts and investors then reprice the stock on the new guidance and expectations.

What happens when a profit warning is announced?

Sometimes profit warnings are announced late on a Friday afternoon, for example, so those active in the stock market are unable to trade straight after the profit warning statement has been made. Companies believe they can sneak profit warnings into a quiet day without the market noticing. This makes for great trades if you can spot a profit warning that somebody else has missed.

The fact remains that the value of a business falls (sometimes significantly depending on the severity of the news) when a profit warning is issued regardless of the time of day.

Why do companies issue profit warnings?

The reasons why a company announces a profit warning can vary. Some companies give minimal explanation while others provide more detail.

The most common for consumer products is a general drop-off in demand. Lower demand leads to lower revenues and can also see a fall in margins.

I believed in April 2022 that ProCook would warn on its profits. Due to the consumer discretionary spending going down, I believed it was a safe assumption that consumer demand for upmarket kitchenware to decline.

I already knew that acquiring new customers was getting harder due to the rise in social media paid ads. The stock was priced highly and therefore offered abnormal returns if I was right. If I was wrong, my upside was capped in a weak market. I shorted the stock and then when the profit warning came the stock opened down more than 50%.

Other issues can include contracts not being signed in the expected period (delayed revenue) and projects going wrong.

Other reasons for profit warnings can include internal blunders and even fraud.

TUI Group in 2010 experienced a £117m accounting blunder in 2010 which led to a recalculation of its profit figures and the resignation of the Finance Director.

Tesco restated its profits and financial statements after aggressively bringing forward revenue and three executives were charged by the Serious Fraud Office.

There can also include legal reasons, for example a change in the law or regulations, or the launch of an investigation into a company or industry.

How are profit warnings issued by companies?

Profit warnings are a public announcement. They are released through the trading updates and statements issued by the company via the RNS. A Press Release will often follow where the bad news is massaged by PR agencies, however the facts will always be in the RNS.

In order to avoid a significantly adverse market reaction to their news, they may decide to announce the profit warning as the stock markets closes down for the weekend, as previously mentioned.

It’s also possible that potential shareholder litigation could be a factor in the timing of a profit warning, as shareholders may decide to take action if the company doesn’t announce bad news in a timely manner.

Can profit warnings present opportunities as well as risks?

Selling after the first profit warning is often the sensible thing to do but sometimes opportunities are created by them.

A lower share price can make the company issuing the warning a more attractive buy opportunity if there is a fundamentally sound underlying commercial business.

Nathan Rothschild, a 19th-century British financier and member of the Rothschild banking family, is credited with saying that “the time to buy is when there’s blood in the streets.”

This reveals an important truth about betting against market psychology. When prices fall and markets tremble, a bold contrarian investment could reap high profits.

The issue here is that unless the profit warning is a short-term problem, these issues often persist. For example, since Covid-19 supply chain issues have been prominent. Many companies warning in 2022 are saying they expect these issues to continue into 2023.

However, Warren Buffett warns that “You pay a very high price in the stock market for a cheery consensus.” This basically means that if everyone agrees with your investment decision, then it’s probably not a good one!

If a business is issuing profit warnings on a regular basis this needs to be taken very seriously as it likely has deep seated structural issues. It’s an old stock market adage that profit warnings, like bad luck, come in threes. So, the first profit warning is rarely the end of the story!

Reasons for a profit warning

Examining the reason given for a profit warning is a good place to start when assessing the risk.

Here are a few things worth considering:

What should you do when you get a profit warning?

According to Schroders, there are three important questions to ask:

In my opinion, it makes sense to always look at the management discussion to decide if a stock’s price is accurately valued by the market.

Why are profit warnings on the rise in the UK?

The number of profit warnings issued by UK-listed companies in the first quarter of 2022 increased 44% year-on-year with a record number of warnings citing rising costs as increased commodity and energy prices fuel inflation, according to the latest EY-Parthenon Profit Warnings report.

Sainsbury’s recent profit warning comes after Tesco and Morrisons also said profits would be hit by rising costs, slower sales and heavy competition on price as the grocery sector was hit by a mix of the pandemic, Brexit and Russia’s war in Ukraine.

Online retailer Asos has also recently announced a profit warning and reported that customers are returning items with a much higher frequency.

In recent weeks Halfords has also issued a profit warning. They announced that pre-tax profit this year would be in the region of £65mln to £75mln, down from previous guidance of £80mln to £90mln, on an “uncertain” outlook. The market generally sees uncertainty with a negative market response.

January and February are a common months for profit warnings as there are a lot of companies reporting and publishing earnings forecasts.

Delays in the financial market often have a negative effect on a stock price too – and so any company delaying publishing from a stated period will often be treated as a warning announcement.

How should you trade profit warnings?

I go through the RNS announcements ever morning in order to find stocks that will move.

Profit warnings, earnings upgrades, and boards of directors changing are all reasons for a move.

Once I have a target trade, I then load up Level 2 and look for a level where I’d like to get short.

Sometimes I’ll deal in the pre-market by calling my broker, checking the borrow, and then asking them to call a market maker and short the stock.

For SETS stocks, I’ll deal in the auction and try to get short in the uncrossing trade.

Click here to get my 10 consistently profitable trading techniques 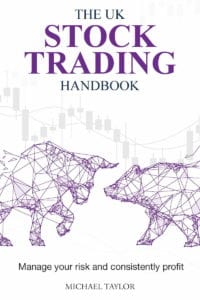